Are your police officers forbidden from using carotid restraints (chokeholds, strangleholds, etc.) and hog-tying methods?
Our policy states that officers are prohibited from using chokeholds or any pressure to the throat or windpipe that may prevent or hinder breathing. The only possible exception is when deadly force is justified during an emergency situation. Since this technique is prohibited, we do not teach officers how to apply chokeholds.

Are police officers trained to de-escalate altercations by using peaceful conflict resolution strategies?
All our police officers are trained in an arrest control method that does not meet force with force. This nationally recognized system, called the Koga Method, has the ultimate purpose during an arrest of taking a suspect safely into custody, meaning safe for both the suspect and the officer. Officers receive mandatory annual training and must successfully pass a skills test.

Are your police officers required to intervene if they witness another officer using excessive force? Will officers be reprimanded if they fail to intervene?
Our policy states that an officer has a duty to intercede if they see another officer using excessive force. They are also required to immediately notify a supervisor. This is also required by state law. Every member of the department must perform in a fair and objective manner and is responsible for promptly reporting any suspected or known instances of racial- or biased-based profiling. Officers who fail to act in a required duty or fail to report as required by both policy and state law are subject to significant disciplinary actions.

Are your police officers forbidden from shooting at moving vehicles?
Our policy states that shots at or from a moving vehicle are rarely effective. Officers should move out of the way of an approaching vehicle instead of shooting at it. Only permissible if no other reasonable means to avert the threat of the vehicle or if deadly force (other than the vehicle) is directed at the officer or others. Officers should not shoot at parts of a vehicle to disable it.

Is there a clear and enforced use-of-force continuum that details what weapons and force are acceptable in a wide variety of civilian-police interactions?
Our policy states that officers shall use only that amount of force that reasonably appears necessary given the facts and circumstances perceived by the officer at the time of the event to accomplish a legitimate law enforcement purpose. Excessive force is unlawful and unauthorized.

Our policy also states that the reasonableness of force will be judged from the perspective of a reasonable officer on the scene at the time of the incident. Any evaluation of reasonableness must allow for the fact that officers are often forced to make split-second decisions about the amount of force that reasonably appears necessary in a particular situation, with limited information and in circumstances that are tense, uncertain and rapidly evolving. Given that no policy can realistically predict every possible situation an officer might encounter, officers are entrusted to use well-reasoned discretion in determining the appropriate use of force in each incident.

Is a warning required before police officers use deadly force?
Our officers are trained to give a verbal warning in situations before using deadly force.

**Exceptions may be necessary based on the totality of the circumstances.

Does your department policy require exhaustion of all alternatives before shooting?
Officers are trained to exhaust all other alternatives, including non-force and less lethal force options, prior to resorting to deadly force.

Is comprehensive reporting required in the Brighton Police Department?
Every member of the Brighton Police Department is responsible for promptly reporting any suspected or known instances of racial- or bias-based profiling to a supervisor. The Department compiles, on at least an annual basis, any information derived from complaints of profiling and makes this information available to the public.

What is the Department’s policy on bias-based policing?
Every member of this department shall perform his/her duties in a fair and objective manner and is responsible for promptly reporting any suspected or known instances of racial- or bias-based profiling to a supervisor. Members should, when reasonable to do so, intervene to prevent any biased-based actions by another member.

Are background checks required on your police officers?
All police officers hired by the Brighton Police Department undergo a complete and thorough investigation of their previous work and personal background. This starts with a screening of the applications. We employ a “no drama” policy when reviewing applications. If an applicant has left a previous employer while under investigation or for any kind of illegal, immoral or egregious conduct, we reject their application.

Interviews are then conducted with a board consisting of the Chief of Police, a command-level officer, and current members of the training and patrol staff. The Brighton Police Department is exceptional in this practice as chiefs of police rarely participate in the initial hiring interviews. Applicants are chosen based on an assessment of their desire to serve the citizens of Brighton and must explain how their personal approach to policing corresponds to the Department’s Organizational Values.

A selection of those interviewed (frequently a small percentage, based on the number of applicants interviewed) are then sent to a psychological practice specializing in police officer hiring to evaluate job suitability as a police officer. The Brighton Police Department is one of very few departments that conduct psychological screening this early in the process. After the psychological screening, all the information known about the applicant is sent to a consulting firm, again one that specializes in police officer hiring, for the background investigation. Information includes the application, documentation of a criminal history report being performed, driver’s license history for every state the applicant lived, and the psychological report. The background investigator then contacts former employees, personal references and professional references.

How does the Brighton Police Department deploy the use of chemical weapons?
Tear gas may be used for crowd control, crowd dispersal, or against barricaded suspects based on the circumstances. Only the Shift Supervisor, Incident Commander or Special Service Unit Commander may authorize the delivery and use of tear gas, and only after evaluating all conditions known at the time and determining that such force reasonably appears justified and necessary.

As with other control devices, oleoresin capsicum (OC) spray and pepper projectiles may be considered for use to bring under control an individual or groups of individuals who are engaging in, or are about to engage in, violent behavior. Pepper projectiles and OC spray should not, however, be used against individuals or groups who merely fail to disperse or do not reasonably appear to present a risk to the safety of officers or the public.

A verbal warning of the intended use of the device should precede its application unless it would otherwise endanger the safety of officers or when it is not practicable due to the circumstances. The purpose of the warning is to give the individual(s) a reasonable opportunity to voluntarily comply and to warn other officers and individuals that the device is being deployed.

For more information on these practices and policies as well as other information regarding officer training, please call 303-655-2300. 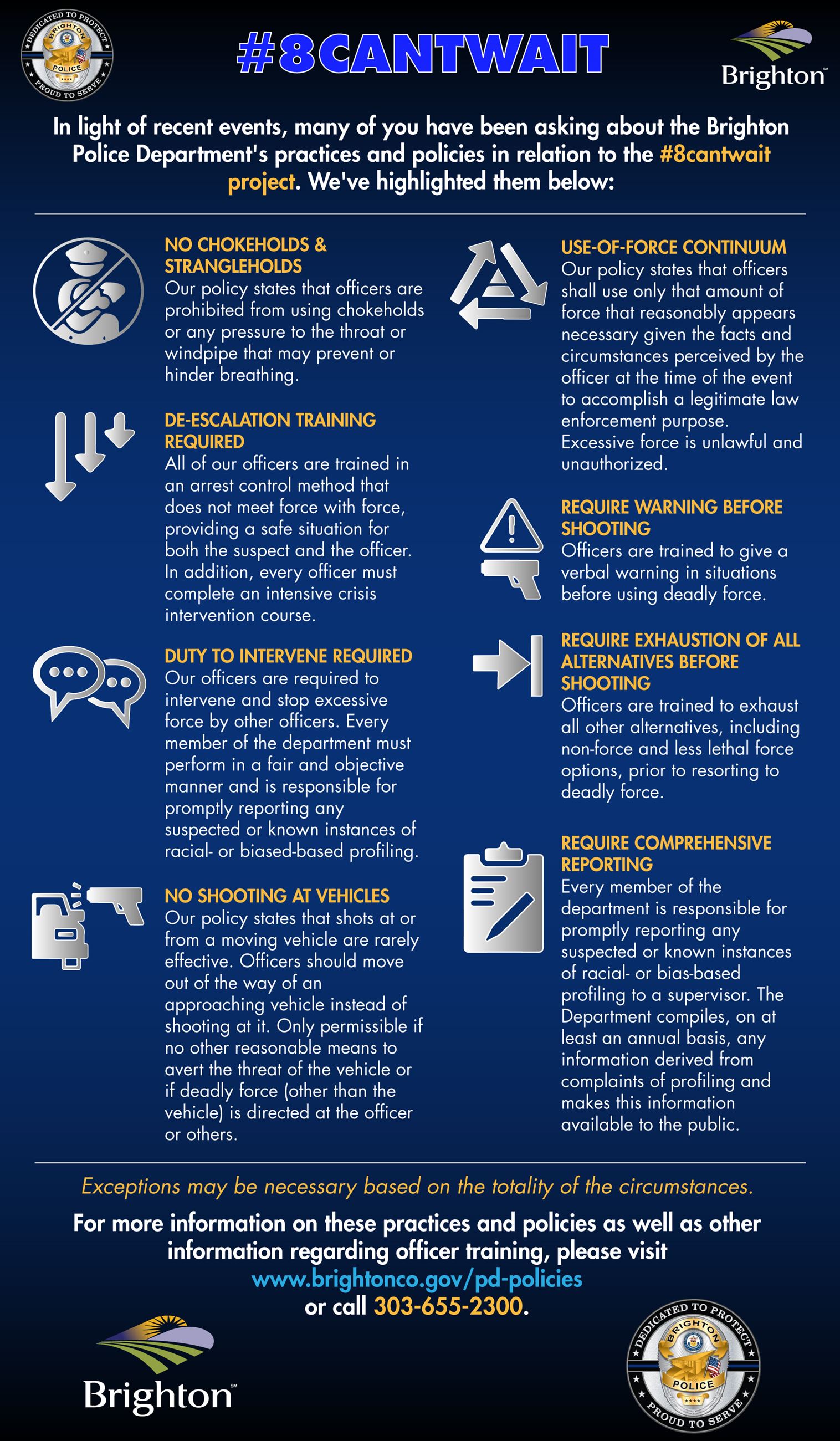